Regogo Records is a boutique, state-of-the-art recording studio that regularly hosts artists showcases and live events. “Whatever music you want to make, Regogo will help you sound your best.” said Pohl, who handles the behind-the-scenes action of Regogo’s business. “George [Mahn] is an incredible musician and producer, and our facility is top notch.” Mahn, whose Vertical Leap project is a sonic mosaic pieced together from jazz, rock, pop, New Age, and contemporary classical, has dedicated his life to musical artistry, and is excited to showcaseTexas Blues, one of the Lone Star state’s greatest contributions to the world. “I’m happy we get to share this music with people,” said Mahn. “Texas Blues is its own style and moves the soul in a truly unique way.”

In the spirit of spreading the gospel of that home-brewed musical tradition, Texas Flood is a perfect headliner for the festival. Formed by guitarist Tommy Katona, Texas Flood began to pay tribute to the late, great Stevie Ray Vaughn’s Texas Blues legacy, and now incorporates nods to other blues legends, as well as their own compositions that craft new paths for the genre to travel. Dylan Bishop is also an appropriate artist for the festival, as the singer guitarist’s soundpays tribute to greats like Johnny “Guitar” Watson, Mercy Baby, and Clarence “Gatemouth”Brown, while cultivating his own identity as the next generation of Texas Blues. And as for opening act Roller Trio, the band’s very existence is indebted to the Bob Dance Texas Blues Festival, as they came together specifically for the first edition in 2017, and now play regularly all over DFW. Of course, Johnny Reno hardly needs any introduction, as the Arkansas-born, Texas-livin’ sax man’s resume goes back to late ’70s, leading up to his ever-popular, retro- minded band, the Lounge Kings, who have been thrilling crowds with jazz-flavored rhythm and blues for over 20 years.

While Texas Blues is certainly the focus of the event, the festival will also be accepting donations for the Dallas Police Department Honor Guard, DFW Rescue Me, and the Jim Clark Trust, three worthy charitable causes. The DPD Honor Guard’s primary function is to perform the funeral services for fallen Dallas police officers, and supporting them is a great way to give back to local law enforcement as gratitude for their service. As for DFW Rescue Me, the organization is all- volunteer foster dog service that endeavors to reduce the number of homeless dogs euthanized in the city of Dallas by finding them forever homes. And the Jim Clark Trust is dedicated to promoting and preserving the legacy and inspiration of its namesake, F1 Champion and Indianapolis 500 Winner Jim Clark, one of the most revered names in the sport of auto racing.

Besides La Comida’s food and beverages, the Bob Dance Texas Blues festival’s other sponsors include Dallas breweries Celestial Beerworks and Peticolas Brewing, as well as two-spirit distillers, Goza Tequila and Monkey Shoulder Scotch Whiskey. The combination of Texas Blues, beer, and booze will make for a memorable holiday experience. Tickets are limited and by invitation only. Contact the studio to attend studio@regogorecords.com 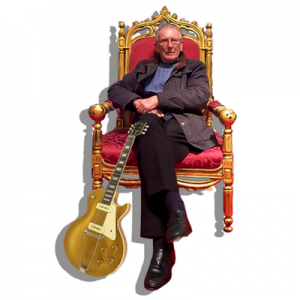